The forum has a major advantage over Facebook as here the Technical info, Projects, Buils Videos etc, and all other categories remain available to access as long as the forum operates.

Please sign up there is no cost and all your details are kept private. Just fill in some info and your a member.

The forum has a major advantage over Facebook as here the Technical info, Projects, Buils Videos etc, and all other categories remain available to access as long as the forum operates.

Please sign up there is no cost and all your details are kept private. Just fill in some info and your a member.

Areas of this Forum are accessible to Members only ....Why not register now and see it all. You can ask questions and post topics.
.
Just click on Register above, Put in User Name & Email and your done, Start surfing
Tech Section, General Discussion, Members Cars, Kustom Birds, Car of the Month and lots more. .

Well it's not so much the car It's more the man and the environment that the Bird was built in, I hope John doesnt mind me saying He's over 60 years old
and he restored this car in his backyard no garage no shed just a make shift roof attached to the fence. He's had no previous car resto experience
Not sure about you but that sure as hell impresses me. I did mine in my double garage with tools laid on and I struggled, How did John manage this, Bloody amazing.

still not impressed OK well John also stripped the car to bare metal , did the body repaires and painted the Bird himself under this make shift roof

Next time you're thinking this is all too hard and wanting to give up just take a look at what John has done here and get back into it.

Here is the story in Johns own words 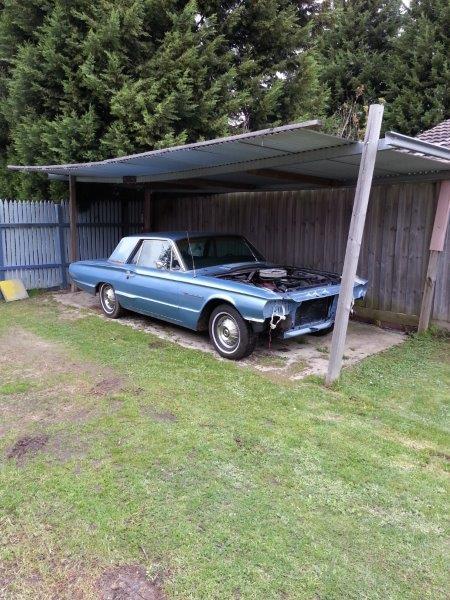 Purchased From:
Sue and I purchased the car in March 2012, after talking to some of the thunderbird people at Gembrook car show. We went up to Wodonga.  We arranged to see the car & said yes to it straight away. When we saw it I knew i had some work to do on it but that is what I wanted. So in 2 weeks we sent him the money and the following weekend Scott and I went up and we drove it back, Scott drove to Seymour and I drove the rest of the way to Rowville through Yea and Yarra Glen. After a week I started the repairs with some help from my mate Rod. I learnt how to read diagrams on the electrical wiring, I went over all the wiring and repaired it or replaced it.    Next the suspension, I sent off to the States for new rubbers etc. Took off springs & repainted them We had the upholstery and new door panels redone in leather as someone had used house paint & a paint brush to change the colour of the interior,  We sent the chrome away to be redone the front bumper (3 times) before getting consumer affairs involved. I was going to rub the paint back and get a panel beater to cut out & fix a couple of rust spots up and then paint it. But the panel beater said it would be better if they painted it as well and I thought that was a good idea but after about 4 months of putting it back I decided to do it myself. Jodie and I scraped all the paint of by hand with paint scrapers and wood chisels

then I repaired as much of the damage as I could and body filled, primed and painted it with a lot of advice from Milsomes LTD in Ferntree gully. The catch can I thought was a piece of rubbish, but Sue recalled something on a previous restoration that it may be a catch can, just as I was about to throw it into the bin.

I sent to Ford in USA & they gave us the history of our car it is as follows:
Manufactured in Wixom, Michigan Assembly plant.  Original colour was silver Mink,(lower body)  With Wimbledon White (upper body), Silver Blue vinyl interior trim.
Build date: April 13th 1964 Imported 3rd May 2002 to Queensland, then onto Wodonga Vic, then to us.

Modifications:
When we got the car the passenger seat was an electric seat, driver’s one a manual. Found, cleaned up a second hand electric motor for Driver’s seat connected it up. It actually worked (bonus.) Put wheel covers on back wheel arch.

Future Plans
Repaint & tidy up the engine and the engine bay. Fit air con back in & save a load of cash to get spray painting professionally done. Rear springs to be re-tensioned, diff to be serviced & new exhaust.

What do you enjoy most about your TBird?
Attend more of the events with Jets car club and more days like Ferny Creek, Rusty Springs, All American Day.
The sense of achievement by restoring the T-bird to the best of my ability. The different skills I have had to learn to make it all happen to finish the restoration. People stopping and talk to you about the car. The friends we have made through joining Jets car club. Before Sue & I bought & restored the T-bird we owned a recreational aircraft. This was caught up in a micro burst in 2009 at the International Air Show. We bought it home & took 2 years to strip down & restore the plane. Our spray booth for this was our patio. Once finished we decided to get the car & try our / my hand at restoring it. WE decided that the patio spray booth would not hold the 2+ tonne T-bird so it was spray painted in the back yard.

On the way home from Wodonga after picking her up 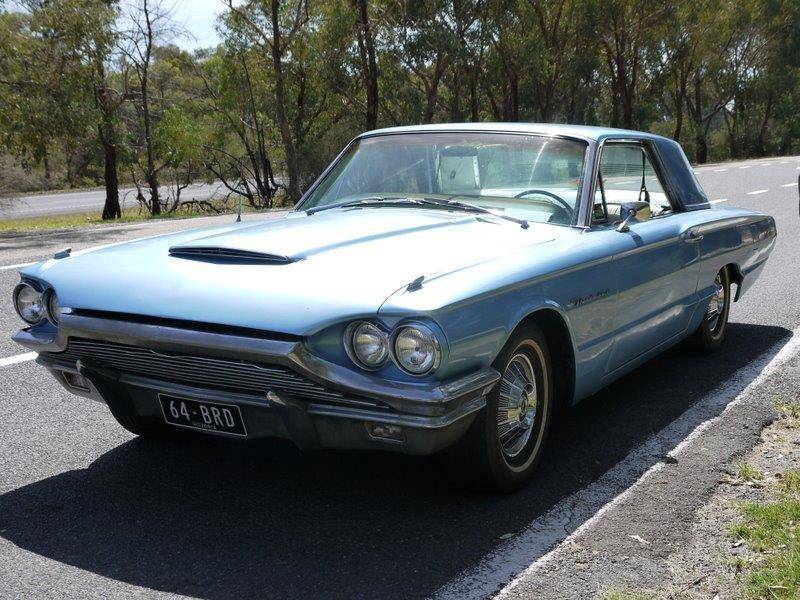 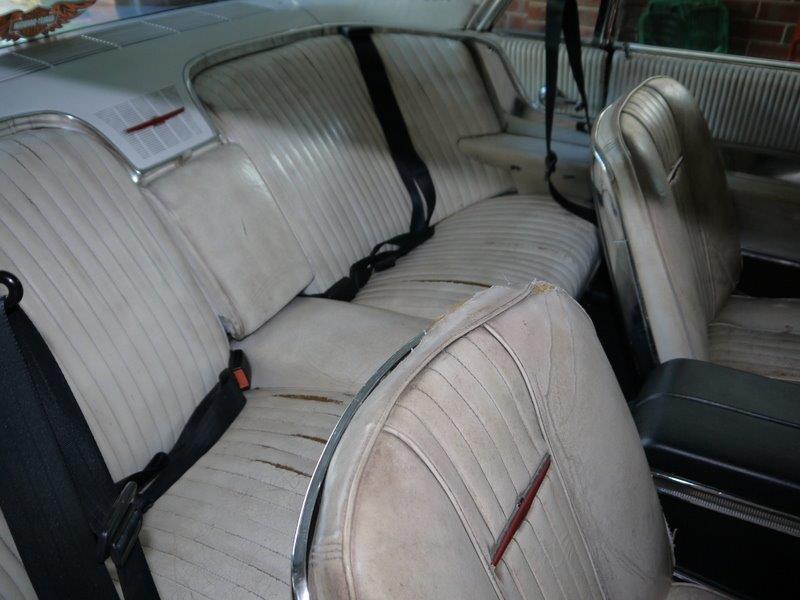 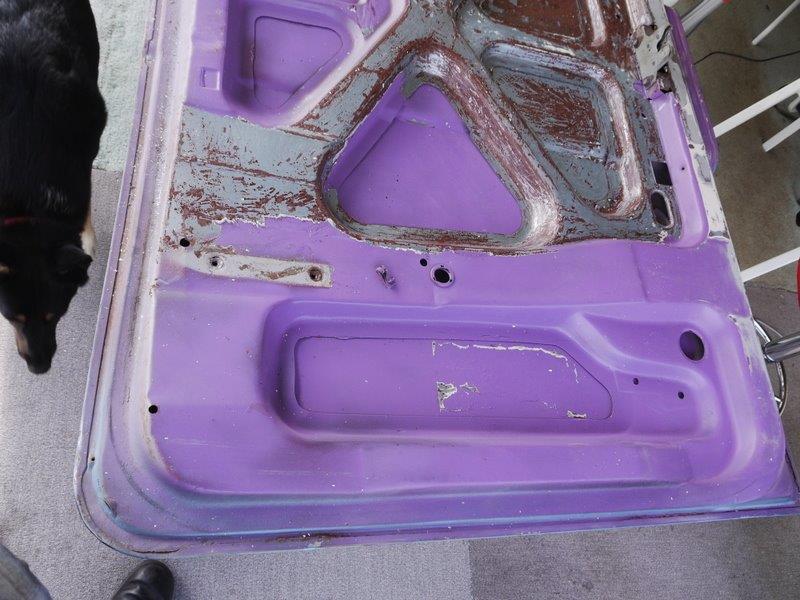 Plenty of paint on the old girl 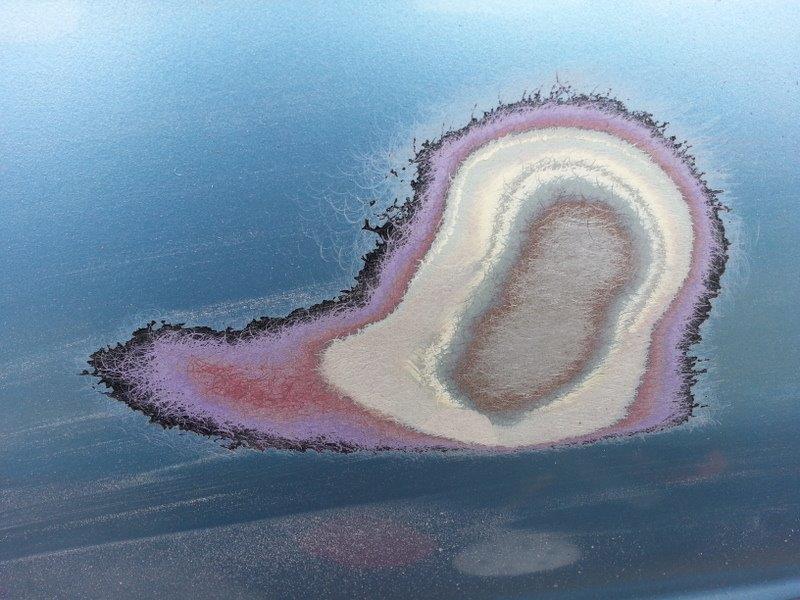 Here she is starting to shed her panels

It's now that time when you start questioning yourself......What have I done 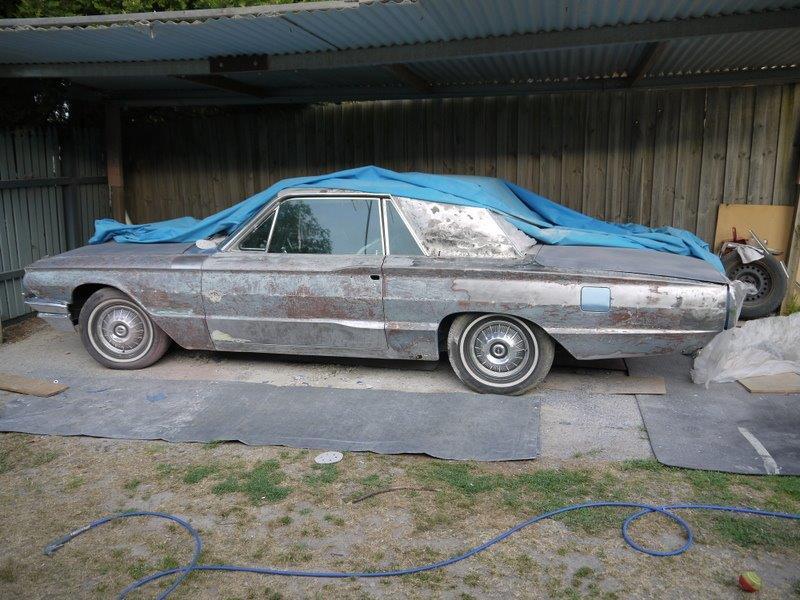 Lots of hard to remove paint 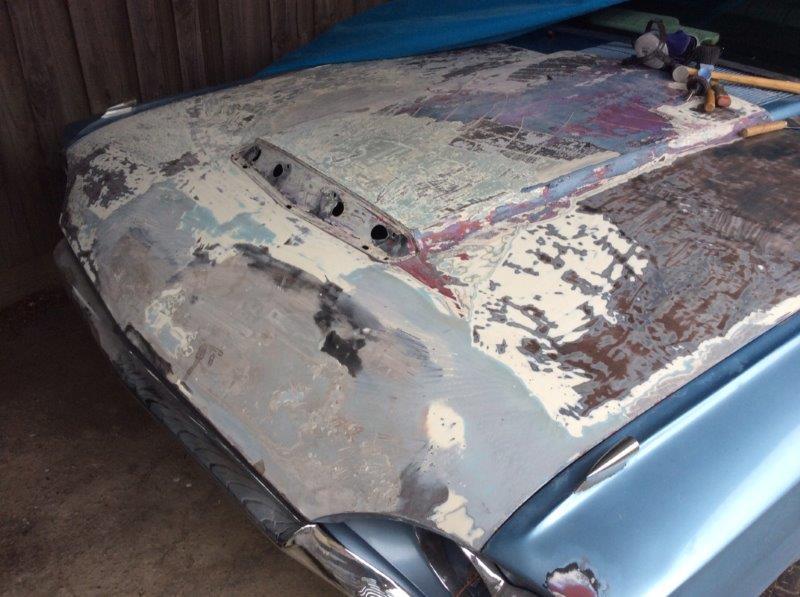 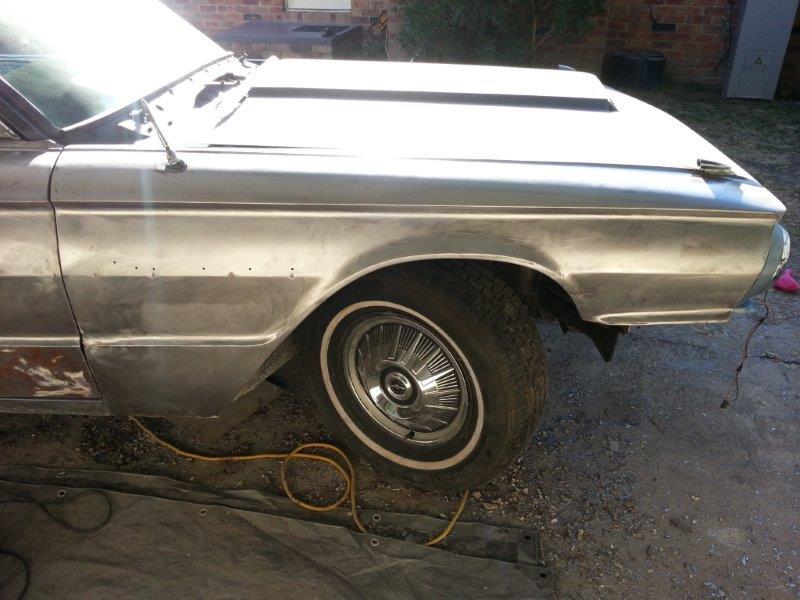 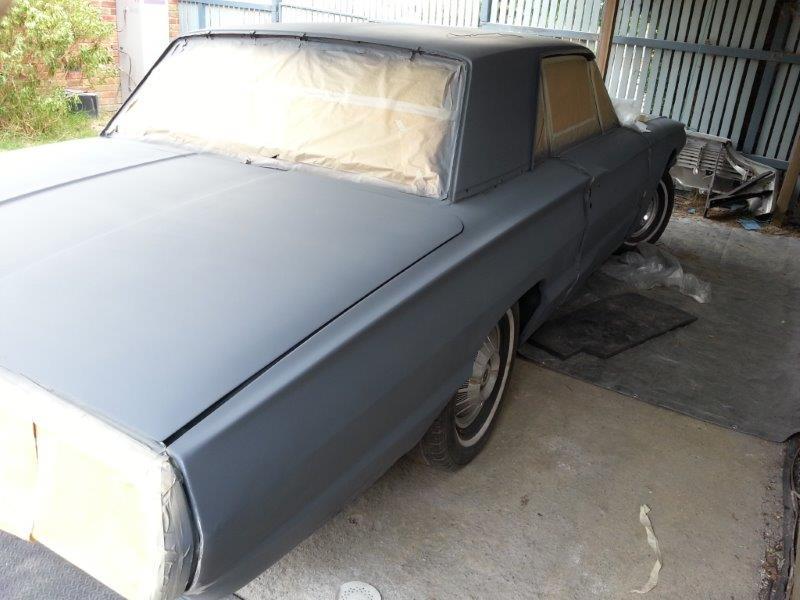 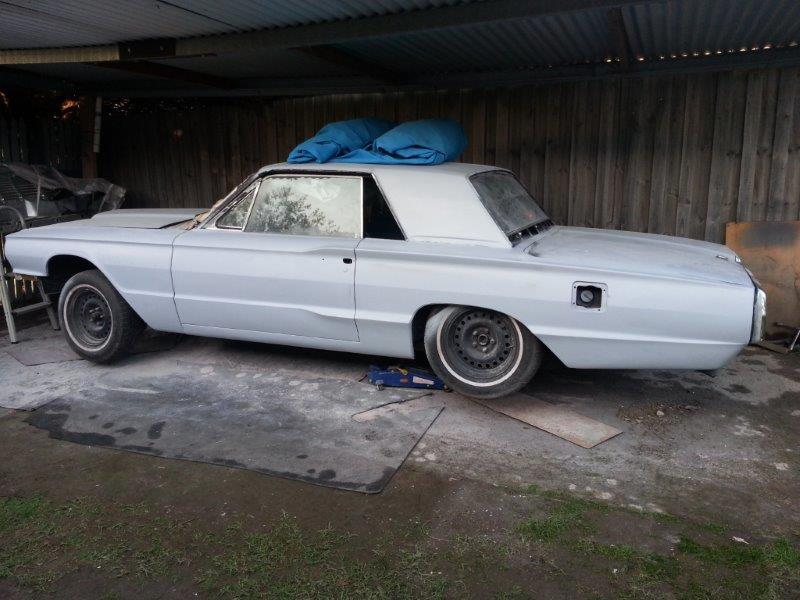 Time for some Interior 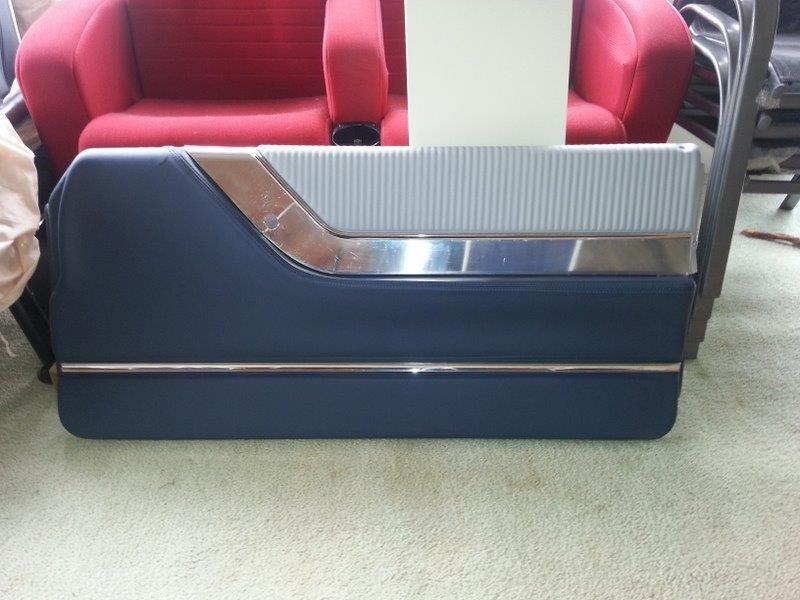 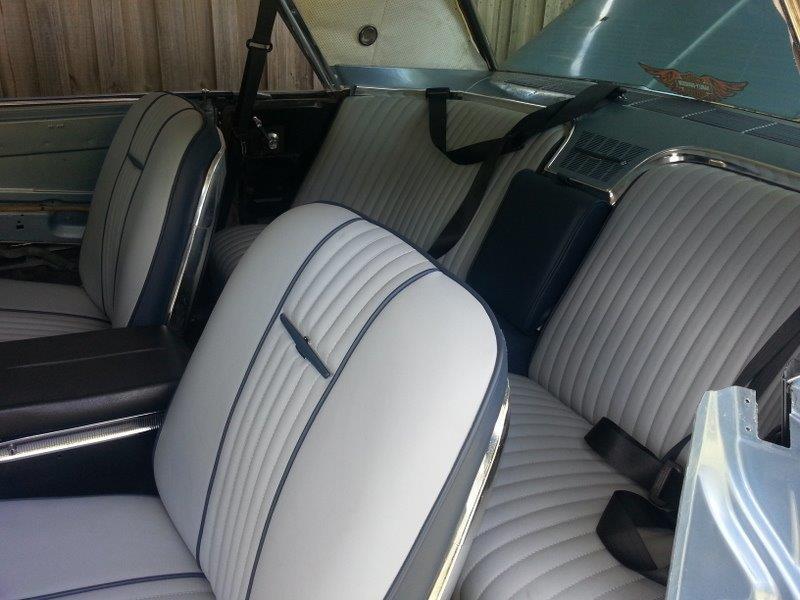 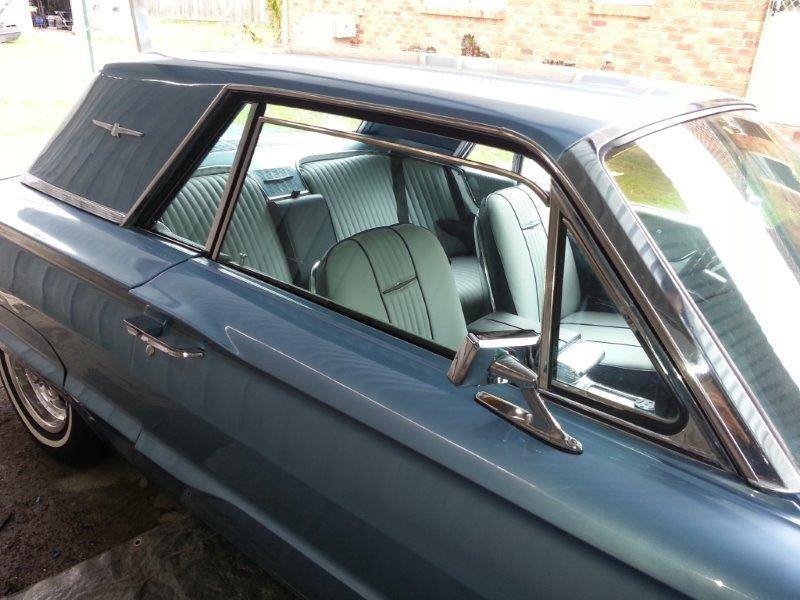 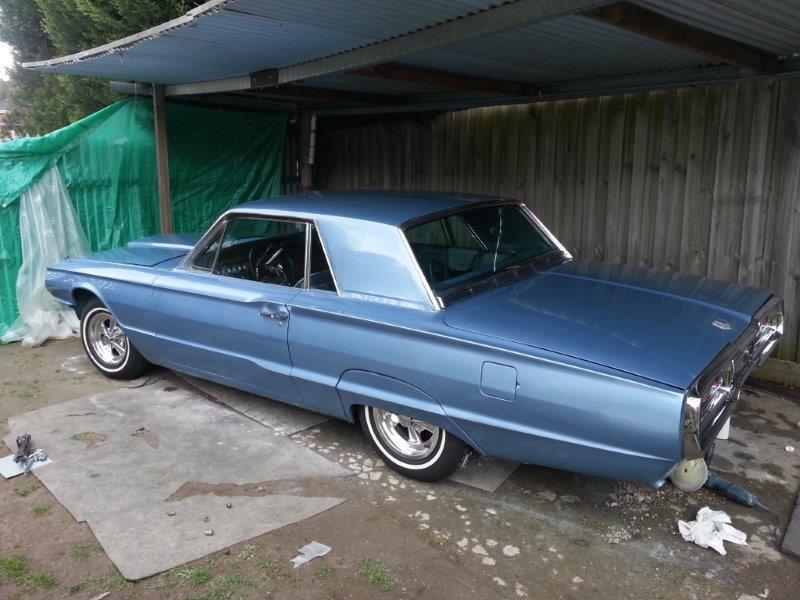 The Man and his car 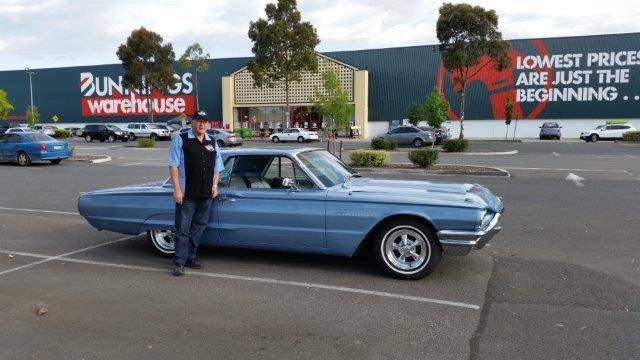 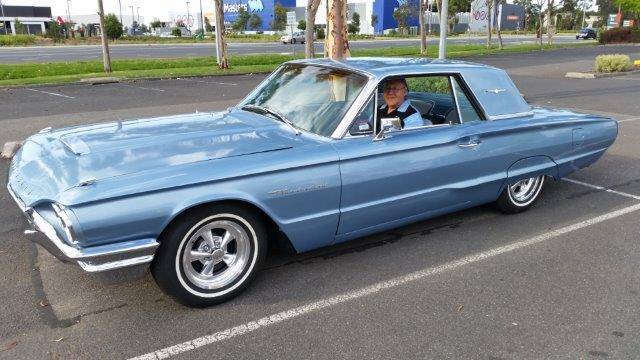 CONGRATULATIONS JOHN THAT IS TRULY AN INSPIRATIONAL BUILD AND I'M SURE WILL HELP A LOT OF BUILDERS KEEP GOING WHEN THE GOING GETS TUFF.

The interior when we first bought it was painted with white house paint & a brush, seats and interior door panels alike.